At the beginning of the twenty-first century, protecting the environment is becoming a major scientific and societal challenge in a context of sustainable development. Coastal zones occupy a special place due to (a) the extent of the coastline (the global coastal line is about twelve times the length of the equator), (b) the high concentration of populations on the littoral, (c) the multiplicity of modes of use of the natural resources (fishing, aquaculture, wind potential, marine renewable energies …) and (d) the multiplicity of levels of governance, namely international, national, regional, local and others. As such, there is growing interest in coastal areas. However, their operation is difficult to grasp because we must fully take into account the multi-dimensionality of this environment, its evolution and the presence of many feedback loops between natural coastal systems, industrial and human. The coastal zone represents the archetype of the complex eco-system, a system for which it is important to apprehend it, to use an approach that transcends disciplines by integrating them.

Knowledge of coastal marine traffic has improved considerably in the last twenty years due to the technical advances made by the means of observation and by the means of calculation available to the modellers. Calibration and validation of numerical models is a constant concern, often due to the downstream use of model results for other specific studies (current maps, water mass drifts, transport and dispersion of equipment in water). In the coastal zone more than elsewhere, the geometric complexity of the coastline, the bathymetry and the variability of the forcings, condition the temporal and spatial scales to be reached.

MARS (Model for Applications at Regional Scales) is a community model developed and distributed by the DYNECO / PHYSED team (laboratory of PHYsics and SEDimentology of the DYNamics Department of Environment COtier) of IFREMER. This computer tool is dedicated to coastal oceanographic modeling, from regional scales to coastal scales (a few hundred or even tens of meters) and includes a strong environmental component (sedimentology modules and biogeochemistry).

At Ifremer, the multidisciplinary MARS model is mainly applied to the regional modeling of metropolitan maritime facades through coastal configurations dedicated to the study of sites and ecosystems of economic or territorial interest. It is also used by various research organizations for various specific needs, for example to study hydrodynamics (natural risk: storm surge, floods, …) and littoral morphodynamics [BRGM, UMR EPOC], lagoon hydrodynamics (Nouméa , Tuamotu) and lagoon (Terminos and Cienfuegos) [IRD], estuarine hydrodynamics and application to the transport of fine sediments [INA, IMFIA, CIMA (Argentina)] … Finally, the calculation code MARS, is exploited by several private companies to carry out impact studies for local communities and the operational coastal oceanography system PREVIMER (http://www.previmer.org) which provides daily hydrodynamic and environmental forecasts. The MARS-3D model, (Lazure and Dumas, 2007) is a finite difference free-surface model based on the resolution of Navier-Stokes equations. He introduces the Boussinesq approximation and the hydrostaticity hypothesis on the vertical. This model, inspired by that of Blumberg and Mellor (1987), is based on the separation of barotropic and baroclinic modes. A 2D model, which provides the free surface elevation and barotropic currents, is thus coupled to the 3D model, which provides the baroclinic currents, to consider separately surface gravity waves and internal waves. The equations of these two modes are solved separately but with the same time step using an iterative method.

(hydrodynamic simulation of sediment flows, numerical simulation of coastal developments (dikes, artificial reefs, etc.) and evaluation of their impacts on the current, enumeration of possible and sustainable solutions. 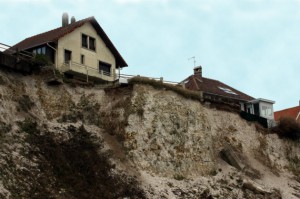 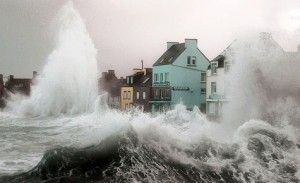 dispersion simulation of polluting substances, spatio-temporal monitoring and probability on the evolution of the quality of coastal waters as a function of external forcings (winds, tides, waves, etc.).

simulation of the becoming of floating waste (plastic type) from the point of discharge. 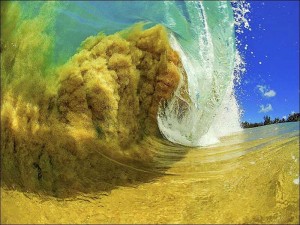